Renovation and history of Tammela

The main building of Tammela was originally built as a residential building with several apartments. The exact year of building is not known, but the first known document of the building is a fire insurance document from 1857. According to the document, the building was built in earlier times.

It can be assumed that Tammela has been built in early 1800s at the latest. The earliest building permit drawing is from 1903, and since the building has been renovated in many ways. Nowadays the surface area of the building is 237 m².

In 1952 the property was bought from a private owner by Länsi-Suomi Oy. The city of Rauma bought the property in 1975 and the building was transformed into a music institute in 1976 and 1977.

In late 1990s, Tammela was renovated to include spaces for exhibitions and for information providing purposes. The character of the timber building was returned to the interior and the floor plan was changed to resemble the plan of 1903. The building was renovated in a way that showcases the historical periods of the building. 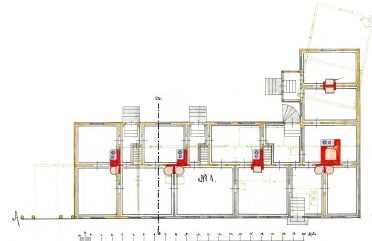